Brett Nolan is practically a native of Mandarin — he moved to the area with his family when he was just one year old. He attended local schools — Crown Point Elementary, Mandarin Middle and Mandarin High — before going to the University of North Florida, where he earned both a bachelor’s in political science and a master’s in public administration. He has worked as the district secretary for Florida State Representative Jason Fischer for the past three years. He may be known to Mandarin NewsLine readers as the author of “Back in Time with Brett,” a semi-regular column in which he acts as a tour guide through some of the historical structures in the area. Today, he lives with his cat Smokey in an 1800s cottage in the heart of Mandarin.

Q: How did you become so interested in Mandarin history?
A: It all started with my fascination with Jacksonville history, which was inspired by the old school, Public School Number Four, in the Brooklyn area of Jacksonville, near the Fuller Warren Bridge. I started volunteering at this abandoned old school and helped with cleaning it up. It made me think about Mandarin history … which is neat, because in Mandarin you can have a 19th century home right next to new development. 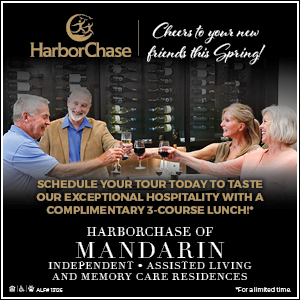 One of the first things I noticed was the old concrete signposts in some areas of Mandarin, which had fallen into disrepair. The city of Jacksonville had similar ones that had been recently painted and I thought Mandarin’s should be, too. So, I took that on.

Q: What happened after that?

Q: What is it that you hope to accomplish with your spotlight on history?
A: I’d like people in Mandarin to feel like they live in a vibrant community. Our history has been tucked away, but there is so much of it — and there are a lot of things that make Mandarin unique.

Q: What do you like to do in your spare time?
A: I’m enjoying learning how to play tennis, so I practice that a lot. I also enjoy reading and researching history. I like to garden; I have citrus trees in my yard and I’m growing the ingredients for salsa — tomatoes and peppers. I recently purchased a 1970s camera and I’m getting into film photography. I’ve taken a lot of cool photos of Mandarin Road with it.

Q: Where do you see yourself in 10 years?

A: I would imagine I’d still be living in Mandarin, working with the Mandarin Museum and Mandarin Community Club. With my background in government, I’d imagine I’d be working in something that relates to public service.