When Krista Keating-Joseph’s children were little, she would sing “Let There Be Peace on Earth” and she would end the song with “let peace begin with Charlie” – a reference to her oldest son.

She now considers those words to be prophetic. 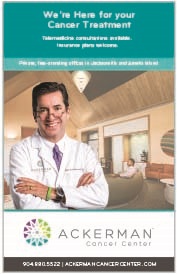 Keating-Joseph’s late son, U.S. Navy SEAL Charles Keating IV, died for his country and for peace May 3, 2016. Keating, part of a quick reaction force team, fought a long and fierce gun battle against ISIS in Iraq. He and the team were supporting Peshmerga forces near the Iraqi town of Teleskop and ultimately saved the Christian village and trapped US advisors.

“When he was a boy, we would visit nursing homes and talk to the veterans. Charlie loved asking them about war and wanting to see their medals. You could see the veteran’s eyes light up because not many people want to hear their stories. They really are remarkable,” said Keating-Joseph, a Ponte Vedra Beach resident who grew up in Arizona.

This Veterans Day, Keating-Joseph will honor Charlie by going on a beach run — a place where she can remember the boy who seemed to have lived his whole life preparing mentally and physically for his ultimate role.

Keating-Joseph is a Gold Star Mom — a title used to distinguish mothers whose soldier made the ultimate sacrifice. Every day is Veterans Day, and it is a day to honor all those past and present who are serving or served in the military, she said.

“I see an older gentleman at the grocery store wearing a specific ship Navy cap, and I always tell him ‘thank you for your service.’ I guess what non-military families miss is that when these guys and gals train and deploy, they are separated from the ones they love — all because of their love of our country,” said Keating-Joseph. “Some may go into the military for a job, but you really don’t stay if you don’t feel in your heart that you are helping your neighbors and our country and other countries for the greater good, hopefully peace.”

Keating-Joseph continues to honor her son by writing about his life lessons in a series of four children’s books, beginning with “Big-Hearted Charlie Runs the Mile.” Keating-Joseph’s book took first place in the Royal Palm Literary Awards and was made even more special with Keating-Joseph’s mother, Phyliss Holmes, illustrating all four books.

Keating-Joseph also wrote a memoir in collaboration with Colonel (Retired) Will G. Merrill Jr. entitled “Charlie, Don’t Be A Hero,” a story about Charlie’s remarkable life and his heroic death. Now her mission is to help others, and her faith in God helps her to move forward.

“I spend my time writing children’s books about Charlie and his big heart. He was a person who aspired to greatness, and the books represent those stories. Of course, the ‘Big-Hearted Charlie’ series isn’t about Charlie’s sacrifice. The books are to motivate kids and teach them about fortitude and how to be successful. It’s much easier to cope by taking my loss and moving it to a project for others, especially children. Charlie would have liked that,” said Keating-Joseph.

Col. Merrill, who served in the US Army for 31 years, said Charlie was a hero long before he died for his country, pointing out that two months prior to his death Charlie was awarded the Silver Star Medal (later upgraded to Navy Cross, the second highest decoration awarded to Navy personnel). Also, Keating was posthumously promoted to Chief Petty Officer.

“The whole story of his entire life was compelling and his family’s life is also compelling,” said Merrill referring to Keating-Joseph’s cross-country accomplishments both as a university athlete and as a school track and field coach. “Krista was quite an athlete, and she did a lot of physical training with Charlie growing up. That had a major impact.”

When it comes to honoring veterans, Keating-Joseph and Merrill agree that taking the time to simply acknowledge others who served is more powerful than it may sound. Sometimes a neighbor or someone you pass in the store is a veteran, and you may not have noticed, said Keating-Joseph. Take the time to notice, she said.

“Parades and ceremonies are great, but I very much appreciate it when people say ‘thank you for your service,’” said Merrill.

Keating-Joseph added: “The best thing a community can do for Gold Star Families is never forget their child’s sacrifice. You can do this by not kneeling to the flag, donating to a cause that helps others, buying a book and reading about that person, not just Charlie but so many others have been written about as well. I just wanted people to know that Charlie was a regular kid growing up with a dream to serve our country. I wanted everyone to know how he grew up and what he believed in. There are so many more kids like him, and they want to do something for others.”

To learn more about the Big-Hearted Charlie series, Keating-Joseph’s memoir or to contact Keating-Joseph, visit KristaKeatingJoseph.com or e-mail her at kkeatingjoseph@gmail.com.